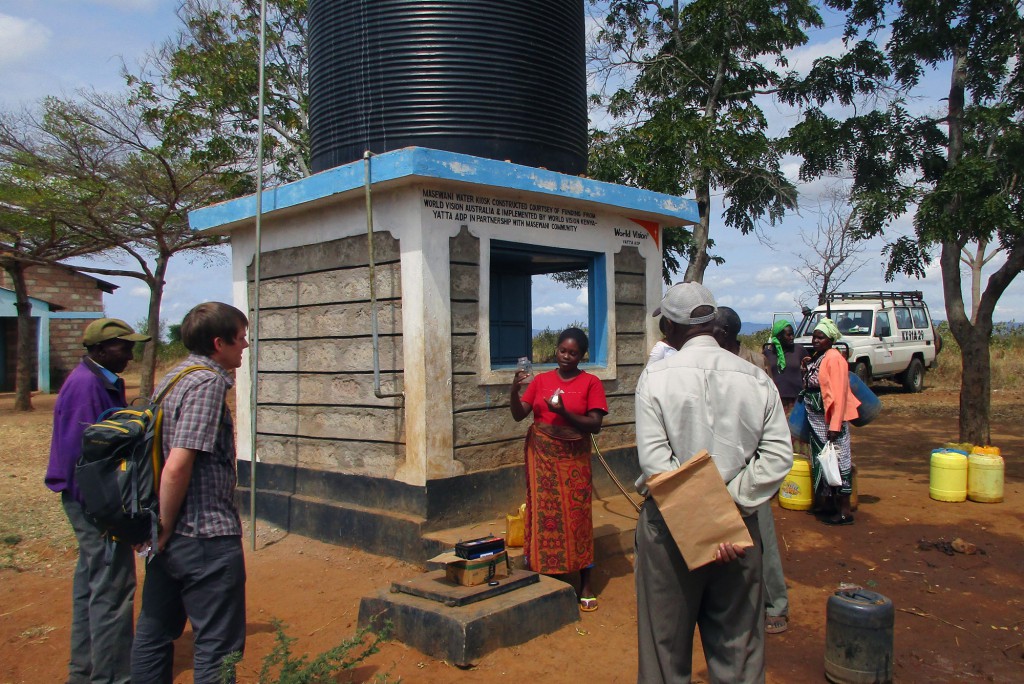 After a productive trip in April to train community leaders in the use of the SE200™ Community Chlorine Maker, the MSR team returned to Kenya and Mali in July to evaluate the success of those trainings. The team also gathered water quality and survey data to understand the chlorine maker’s impact on improving access to clean drinking water.

“Beatriz is a pillar in her community. She walks miles to talk to people about water education and conducts seminars about safe water at schools,” says Zac Gleason, a microbiologist and the manager of MSR’s water research lab.

Last July, Zac joined local World Vision leaders in Kenya and Mali to learn more about how the SE200 Community Chlorine Maker is being adopted by communities, and to evaluate whether the technology is truly improving access to safe drinking water.

Just three months prior, community leaders like Beatriz, had been trained by MSR and World Vision as the first local operators of the SE200 Chlorine Maker. The innovative device generates chlorine using only water, table salt and electricity. It provides communities, like Beatriz’s outside Matuu, Kenya, an easy way to treat their drinking water for potentially deadly bacteria and viruses.

Those first operators have since trained others in a cascading education model. Zac’s follow-up trip was to evaluate whether that training model was successful. And more, MSR and World Vision wanted to understand:

Question 1: Did the device prove simple enough to learn?

The team began their quest amid the crowded, festooned streets of market day in Bamako, Mali in West Africa—in search of an ice cooler for water samples (more on that later). Mali is known for its scorching climate and soon the team was driving through it, headed to the surrounding communities to hear operators and their neighbors talk about their experience with the SE200 device.

World Vision-built boreholes supply several of these remote villages with water for daily life, including the water they drink. Zac’s first job was to observe trainees operate the SE200 Chlorine Maker and watch for cues of proper understanding. Because users must simply mix a salt brine, add it to the device and push one button, the chlorine maker requires few steps. And Zac witnessed no mistakes.

“Not a single operator needed correction at any point!” Zac says. “The original trainees had retained understanding of the device—including what was important, and what wasn’t.”

Operators throughout the trip told Zac that the device was “like magic,” referring to the way its glowing bubbles seemingly magically turned salt water into chlorine.

Ease of use was a priority of the device’s design and our team was thrilled to see how its simplicity transcended cultures, languages and environmental contexts. Thirty operators were trained in April across Mali and Kenya. Today 120 operators, including some curious children, are continuing to spread this safe water education.

Question 2: Is the device being adopted into everyday life?

In both Mali and the eight communities visited in Kenya, Zac met with operators to understand if the chlorine maker really made sense in their lives. The answer always began with a field trip.

Beatriz’s housing cluster in Kenya lies 350 meters from her closest water source. The canal is also a favorite watering hole of her family’s cows—large purveyors of the bacteria that enter the water. Making the trek with her, Zac learned how far she travels for water, how she transports it and then stores it in her home.

While collecting the water is labor-intensive, Beatriz explained, the SE200 device is a convenient tool for treating it. This is because the resources it needs are abundant. “It’s amazing to be able to make chlorine using only salt,” she told Zac. “I can get salt anywhere.”

Car and motorcycle batteries used to power and run the device are also common in most villages. However, the smaller the battery, the more frequently it needs to be charged. That’s not a problem if users are located near the market where charging stations are available. But throughout his trip, Zac was told that local solar charging stations would go a long way toward full adoption of the device, providing a reliable way to keep it powered for daily use.

As a direct result of this feedback, solar charging stations are being installed in both countries by World Vision teams.

“It’s invaluable for us to talk to the operators face to face,” says Zac. “We gain insight that helps us make better decisions. We need to know their wants and needs when it comes to what’s practical for water treatment.”

In addition, he says, “The operators were glad to meet with someone from the design team and see that we really value their feedback.”

Operators’ feedback indicated that the small, portable and resource-easy chlorine maker was becoming a hit with local communities.

The blue ice cooler. It was critical to Zac’s third goal, which was to learn whether the chlorine maker was indeed making the water safer to drink. The findings would be important in a broader context. That’s because Sustainable Development Goal 6 recently released by the WHO and UNICEF aims to “achieve universal and equitable access to safe1 and affordable drinking water for all” by 2030.

As Zac interviewed operators in each village, he also gathered samples for water quality testing. In Kenya, he had operators collect two jerry cans from their local water source. At the same time, he collected a smaller 100 mL sample in a sterile collection bag. This small sample would help him learn whether the water could be contaminated during transport and storage.

Back at home, the operators treated one jerry can with chlorine made from the SE200 device. They left the other jerry can untreated. Then, Zac took samples from each. The next day, he again collected samples from both the treated and untreated jerry cans.

The tests revealed that during transport and storage, the water was often re-contaminated. This was evident because most of the untreated jerry cans increased in fecal coliforms. It could also mean that the jerry cans themselves were contaminated prior to use.

And what did the tests show about the water treated with chlorine from the SE200? Turns out, 100% of the water samples treated by the SE200 Chlorine Maker (and deemed appropriate for chlorine treatment*) showed zero fecal coliforms. The chlorine maker was doing its job.

In fact, samples taken from those treated water cans 24 hours later also showed no fecal coliforms. This meant the chlorine was keeping the water safe for at least a day of storage.

Zac’s team was excited to see such positive early results, but our work doesn’t stop here. As this pilot program continues, our team will work closely with local World Vision leaders to monitor where the chlorine maker can make the greatest impact—whether that’s in WASH committees, schools, health clinics, or water kiosks. Stay tuned.

This project was funded by the Life Sciences Discovery Fund and supported by Washington Global Health Alliance.

* Chlorine treatment is recommended by the US Center for Disease Control for clear or slightly cloudy water. In Zac’s study, operators decided whether the water was suitable for chlorine treatment.